The Canvas of Curiosities

Here's something I've had buzzing around in my mind for quite some time now if only I could find some "me" time. Sound familiar? At last I got to rummage in the darkest corners of my craft room (& jewellery box) & let my imagination run riot. As you can see, minimalist it ain't! Planned  & carefully executed....nope!! But isn't that what "mixed media" is all about?  It's about gathering around your crafting cauldron & seeing what your crazed (in my case!) mind will produce. Sometimes it goes wrong & after much chest beating it goes in the bin but in this case.. well I'm quite proud of my result. May I present my "Canvas of Curiosities" ! 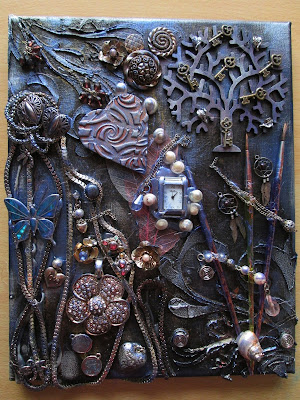 OK so I started by taking a A4 box canvas which had been lurking at the back of one of my cupboards for a while. Using a stencil & Dreamweaver white embossing paste I pasted  the textured flourishes in the corners then when dry I painted the whole thing with black gesso. So I could have used black paste after I'd applied gesso but guess what? Only had glossy not matt. So next came the fun bits. I took some Cosmic Shimmer Metallic Gilding Polish to added some gorgeous blue sheen to the canvas & pasted bits. I also sprayed with Tattered Angels Glimmer mists in Antique Brass & Pink Ice. 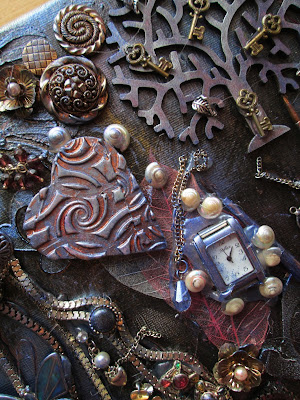 Now it was time to go mad with the glue gun & use all those jewellery pieces  which you know you'll never wear again but which you're loath to put in the bin. The heart you see in the above pic I made with my Melt Pot when I first had it (had to have one, ask me how many times I've used it!!) . I used a silicone mould UTEE & embossing powders but to age it a bit I've given it a coat of metallic acrylic paint & the gilding polish. You can also see some skeleton leaves (used to love those!) 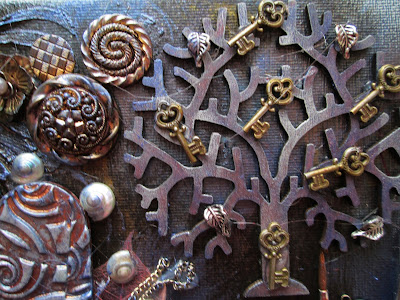 So the keys to life on the tree of life? A bit cryptic perhaps. You never know what you're going to find when you have a rummage do you? I unearthed the little tree which I found in a pound shop intending to enamel it in said Melt Pot but I'm glad I didn't now. Now you may notice the "trails" of hot glue left from my glue which I didn't notice until I'd done my photos (muttered curses!) however the more I looked I kind of liked the cobwebby effect which seemed in keeping with the general look I'm going for so I decided to leave them. 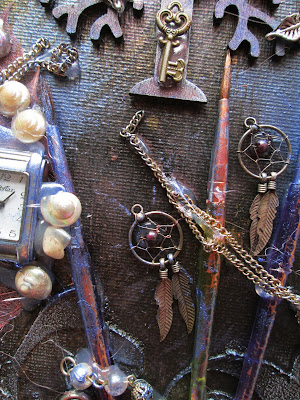 At one side I added some old paint brushes with some chains, shells old earrings. 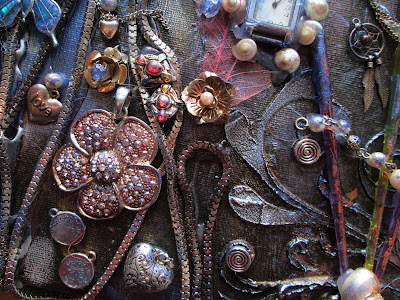 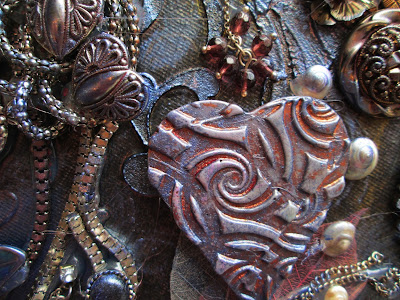 Lastly I went over the whole thing with the gilding polish & sprays & left over night to dry. 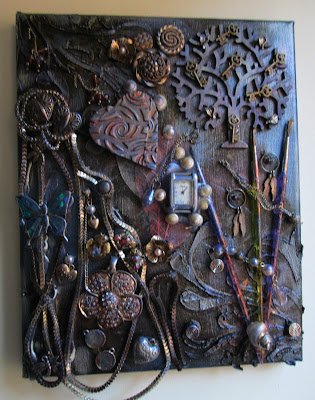 Here it is on the wall & as you can see I've allowed the chunky chain to trail off the canvas a bit. I'm really pleased with the end product but the only trouble is... I can feel another one coming on!! Now where did I put all those other treasures??
Posted by Debbie Frost at Saturday, November 26, 2016