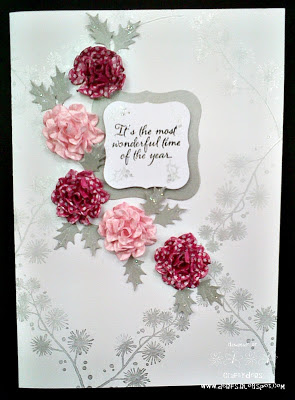 It was my turn to demo at Japonica last Thursday (sorry I'm a bit late with this!) & my theme was Christmas Messages. I was using the Stampendous clear set "Tis the Season" which has so many great sentiments for the focal point of your card & to use for the insert too. The "roses" surrounding the verse were made from Candis. For those who aren't familiar with these they are small domed discs which come in a variety of colours, prints & finishes to be used as embellishments. I was watching a lady demo these at Taunton show recently & have taken her idea & run with it. They are very simple to make but look pretty & effective don't they?Simply punch a 1" circle of card to use as your base & squidge a large dollop of silicone onto the centre. Curl 2 Candis around a small stick & these form the centre of the rose. Next just take a Candi in one hand & twist using a pair of tweezers with the other. These form the petals so now simply build up the rose working from the centre out. There are no rules, just keep going until it looks right. I made the outer edge flatter by glueing the untwisted edge & tucking under the previous row. The background was stamped with Maganta's Snowflake branch & I've just added a few punched silver holly leaves & crystal glitter to finish.

Here's a closer look at the flowers 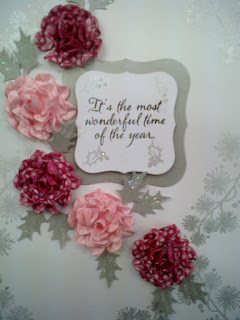 Pop in to Japonica & take a closer look & I'll be happy to talk you through how to make the roses & I few other flowers that popped out of my imagination while I was on a roll!